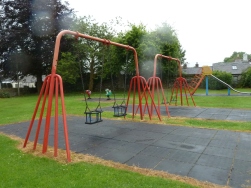 Since 2014 Moniaive Initiative has been working with the local community to decide and implement improvements to Macara Park.  The first phase of improvements focused on the children’s Play Area.

A newly-formed group, the Friends of Macara Park, held work-parties in Summer 2016 to clean the existing play equipment and pressure-hose the safety surfacing.  We also had a fun morning of children’s activities in the Park at Easter 2016, which provided useful comments and feedback on our plans. 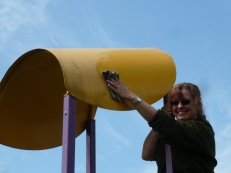 Following further local consultation, we selected Playdale to install a small selection of  new equipment. A dedicated Toddler Area consisting of a multi-play climbing frame, along with two springies, was chosen for pre-school age children, whilst an Aerial Runway was selected to supplement the existing equipment for older children.  The overall project to cost in the region of £32,000.

In September 2017 we finally reached our fundraising target, thanks to the following generous grants and donations:

Our local fundraising target was given a welcome boost by the staff of Watsons Groceries, who donated the proceeds from the sale of the “Big Graham” calendar to our project in February 2017.

Installation commenced in November 2017, and the Aerial Runway was completed early in the New Year.  Unfortunately the weather was against us, and the safety surfacing for the Toddler Area could not be completed until early March 2018.

On 26th March 2018 we held the Official Opening of the new Play Equipment.  After a quick downpour, Elaine and Evie were able to cut the ribbon on the new Toddler Area,  whilst Carys and Kelvin (the Gala Queen and Gala King) cut the ribbon on the Aerial Runway.  We then had a sunny, Spring afternoon of Easter Egg Hunts, egg and spoon races, bike circuits, and good, old-fashioned play on the new equipment. 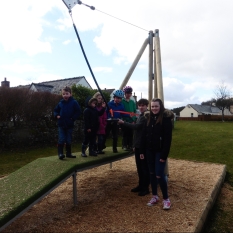 Thanks to everyone who donated time or money to this project!

We are now investigating options for the next phase of improvements, so please do contact us with your ideas!